Well-known and highly respected, Ms. Nelson is considered a local legend by the aviation community and dignitaries in the Greater Palm Springs area. Her achievements and contributions to the industry have earned her national as well as local recognition. She was named one of the nation’s top 12 Fixed Base Operator (FBO) Employees by the national publication, Professional Pilot Magazine, an award she received for ten consecutive years. Ms. Nelson was also honored on July 16, 1997, with the proclamation of the Peni Nelson Day by then-Mayor of Palm Springs, California, William G. Kleindienst.

Peni Nelson played a role in the early development of the Jacqueline Cochran Regional Airport, long before Desert Jet Center became established. She was a founding partner of one of the first FBOs at the airport.

Ms. Nelson began her career in aviation by washing planes to help pay for flying lessons. She soon expanded her services and started an aircraft cleaning and detailing business launching a new company, Skykleen. She has since piloted various aircraft, including a B17 Bomber, a B-24, the Goodyear blimp, piston aircraft, and jets. Her adventurous spirit in the air also led her to Wing Walking. 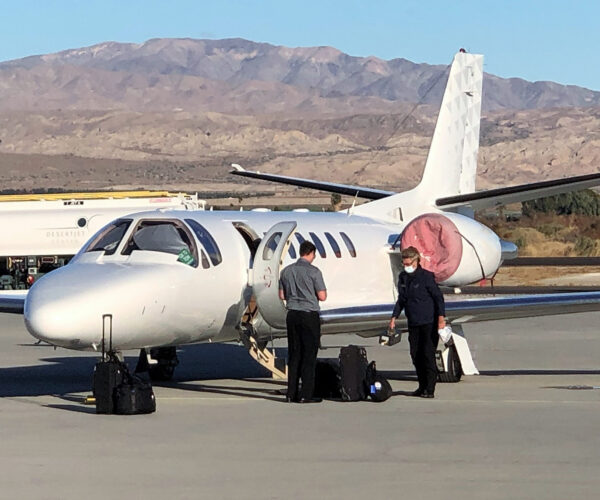 From there, Ms. Nelson’s interest turned to the FBO side of the industry. She developed her experience and knowledge through the many positions she held at various FBOs in the area, honing her skills and business acumen to become a former founding partner of an FBO business. She now brings her expertise and 36 years of business aviation experience to Desert Jet Center.

“We are so excited to have Peni join us at Desert Jet Center,” said Jared Fox, Desert Jet CEO. “She is a true legend in the industry and brings a wealth of knowledge and positive attitude to our growing business at KTRM. It’s great to have her on the Desert Jet team.”

“Having Peni join our team has been nothing short of amazing,” stated Roman Mendez, Desert Jet Center GM. “She brings many accolades and years of experience, but her love of aviation is most contagious! I have enjoyed working alongside her in building lasting relationships with our customers.”

For more information, visit the Desert Jet Center website at www.desertjetcenter.com, or contact us at fbo@desertjet.com or at (800) 338-KTRM.