Although working from home has become the new normal for many companies, it can also create a risk to their company culture. Without the ability to socialize and work together in person, many employees become less connected with their team members, managers, and customers.

That is not the case at Desert Jet. It has been the opposite. With growth to its charter, aircraft maintenance, and FBO customer base, the company is more focused on its employees to ensure their corporate culture remains strong.

Most recently, Desert Jet launched an employee recognition award program where employees play a significant role in determining who is nominated. The award, referred to as the Jacqueline Cochran Recognition Award of Excellence, is named after the legendary aviator known for her many accomplishments and traits, including breaking world records in speed, altitude, and distance. Employees nominate their peers based on actions performed that exemplify these traits through performance, service to others, and constant improvement. 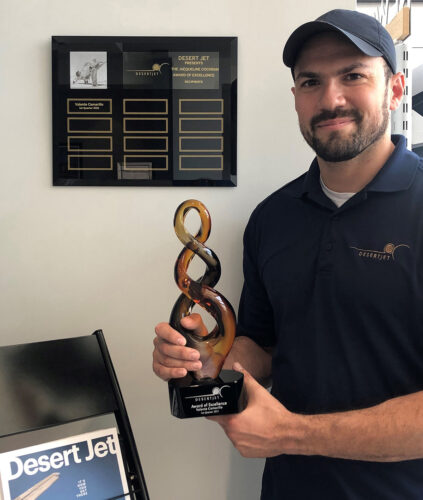 “We are thrilled by the response of our team to the new recognition award program,” said Jared Fox, Desert Jet CEO. “The high number of employee nominations reflects a strong corporate culture where employees are engaged and genuinely committed to recognizing one another for going above and beyond in service and safety. We are very proud to honor the legacy of Jacqueline Cochran at KTRM by naming our recognition award after her as a symbol of excellence. Congratulations to our first winner Valente on a well-deserved award!”

In addition to awarding a stunning trophy and name placement on the new company perpetual plaque, Desert Jet also donates to the non-profit group, Angel Flight West, on behalf of the employee. Every donation enables another free flight for children and adults who require transportation to medical facilities and treatments.